A Historic Mission for VITEC

NASA is embarking on a historic mission to take humans farther into space than we have ever traveled.

NASA was looking for ways to harness IP streaming video technology to help monitor and maintain equipment on the Orion Multi-Purpose Crew Vehicle in manned missions to the Moon and Mars.

Only the most proven, field-tested technologies can be trusted to launch humans safely and securely into space.

The hardware decoding product provided by VITEC ensures that video feeds —with any frame rate, frame resolution, or bitrate— can be decoded and transmitted on industry standard video outputs, such as HDMI or SDI.

Inside this Success Story

NASA is embarking on an historic mission to take humans farther into space than we have ever traveled. By mid-decade, The Orion spacecraft is expected to take the next man—and first woman—to the moon, with follow-on missions that will eventually result in crewed missions to Mars as part of NASA’s Artemis Program.

NASA was looking for ways to harness IP streaming video technology to help monitor and maintain equipment on the Orion Multi-Purpose Crew Vehicle in manned missions to the Moon and Mars.

In support of the mission, IPTV will be used by NASA to help monitor and maintain equipment subjected to the extreme conditions of space flight.

The environment in which video solutions for NASA’s Orion Multi-Purpose Crew Vehicle must work are extremely harsh and volatile. There are a tremendous number of variables that are constantly shifting which can affect how video streams are transmitted.

To support operations in these challenging conditions the agency deploys proven, mature solutions that have stood the test of time. As a result, long development life cycles are needed for the most critical elements of vehicles NASA launches into space. This is especially true for those that involve manned missions. Only the most proven, field-tested technologies can be trusted to launch humans safely and securely into space.

When the Orion program was launched, IPTV technology was still in its early stages of development. As a result, many proprietary on-board video systems were developed to support the rigorous environment associated with NASA missions. The proprietary nature of the video solutions, however, make it difficult to share data with the broad community of experts and technicians that support the Orion mission.

Over the past decade IPTV standards have evolved and matured considerably. VITEC has introduced substantial IPTV innovations capable of contributing to the NASA mission by enhancing the ability to monitor critical systems on the Orion spacecraft.

NASA needed a highly flexible and robust decoder to handle the very precise, fluctuating video feeds reliably. VITEC provided video stream decoding technology to receive and manage a range of feeds used for this mission to work reliably no matter what conditions and circumstances may be encountered in space.

VITEC is working with NASA to develop video decoders that are compatible with the complex mix of proprietary and open standard video formats. VITEC’s decoding technology adjusts stream capture module capabilities to manage a range of feeds used for this mission designed to work reliably despite the extreme circumstances presented by working beyond the Earth’s atmospheric conditions.

The hardware decoding product provided by VITEC ensures that video feeds -- with any frame rate, frame resolution, or bitrate -- can be decoded and transmitted on industry standard video outputs, such as HDMI or SDI.

VITEC was tapped by NASA to develop IPTV video decoders that are rugged enough to meet their stringent requirements, but which are also compatible with a complex mix of proprietary and open standard video formats.

VITEC has laid the foundation for future-proofing Orion’s video capacity, enabling it to support new applications and innovations that contribute to NASA’s objectives today, tomorrow and beyond. 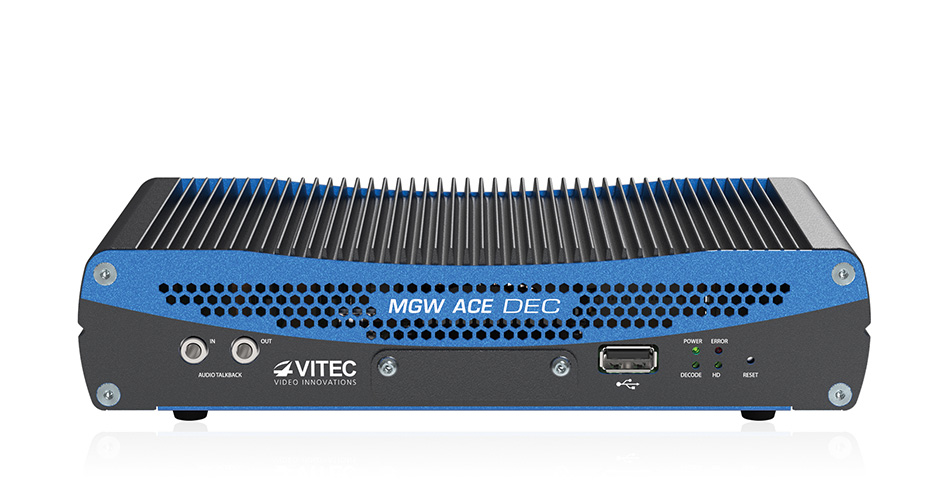 “In looking for a new solution, NBC faced some challenges. The integration of the MSNBC Network into 30 Rock added 400 more production personnel with 50+ more required feeds all within NBC’s existing space. With a majority of NBC’s News, Sports and Entertainment programming originating in high definition, HD infrastructure needed to be supported. Given all these considerations, NBC’s best option was to go with an IPTV based solution, which was deployed. Advances in IPTV technology have made this a clear choice for cost, scalability and support. This paper will detail NBC’s new IPTV Distribution system and will highlight many of the advantages that this system has given them.“

“With VITEC’s comprehensive EZ TV IPTV streaming solution, the US Air Force's Center for Character & Leadership Development (CCLD) has tapped into a versatile tool that allows the organization to affordably record and distribute the dynamic video content. From signage, to training and guest speakers, the organization can capture and distribute all their video content to any screen installed in the facility or directly to a cadet’s desktop.“

“Using VITEC’S MGW Ace and MGW D265 solution, our transmission of the presidential visit in Cuba was a complete success. We had thunderstorms on Sunday and lots of the networks were having issues with their satellite feed, but we never had one single issue. We had continuous coverage and were the talk of the other new agencies because of our VITEC streaming solution.“

“The VITEC EZ TV IPTV Platform was the exact solution we (ESOC) were looking for. Our day-to-day operations are very demanding and constantly evolving based on new incoming information from our satellite feeds and changing user permissions and roles. With EZ TV, we are not boxed into the capabilities of an IPTV product that is not scaled to our needs or robust enough to handle the constant demands of our video streams. VITEC’s powerful, reliable, and super quiet encoding appliances, IPTV experience, and customized rights management is seamless and dynamic.”